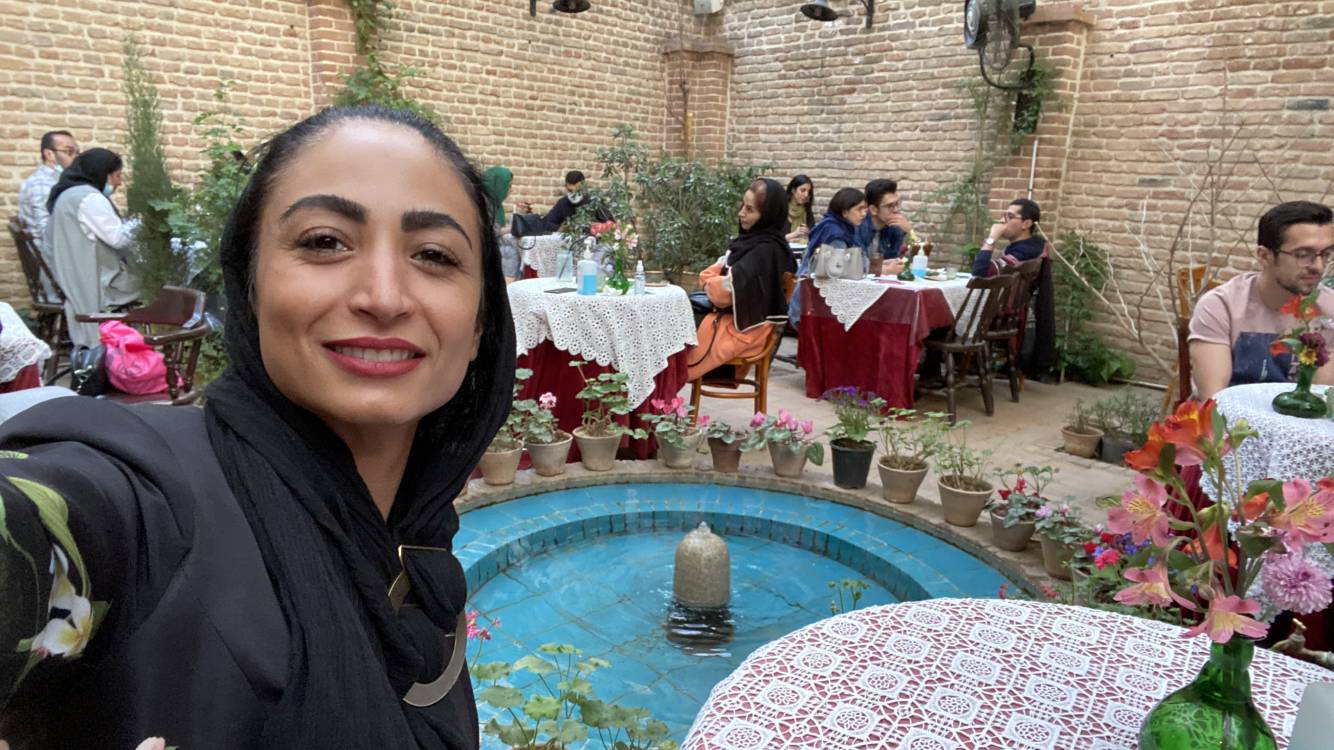 The lace tablecloth we used to make fun of and urge grandma to replace it with a more fashionable one, the knitted-under the-vase-cloth my aunt would knit while gossiping about neighbours, the copper water pitcher my grandfather used to fill in using the tiny hose next to the blue pond, the thick and tall glass my grandmother used to serve tea in... were all in a box in the basement covered in dust. We became modern and looked down on all this old stuff.

But... "I'll have cardamom, cinnamon black tea with saffron rock candy please". And here it comes... the same thick tall glass I laughed at and said to my grandma to throw it away. Goosebumps all over me to see all those at my table. It feels as if my grandmother is serving us dinner in those dishes, the smell of her food is wafting in the air once again, has she come back to the kitchen again? All I miss to believe is to see her wrinkled hands covered with age spots. It's not hers, but I see her, I smell her, I am lost in the past.

Cafe Nikou is one of those beautiful old houses which serves the most delicious and homy-like dishes to food lovers. They have the most diverse menu in which the names of very unique and almost forgotten dishes from all around Iran can be spotted.

I ordered their Ghanbar polo, a rice dish from Shiraz made with little meatballs, raisins and walnut and pomegranate molasses. I was a little ashamed of myself why I didn't even know the name of this dish and that I had never tried it before, but my shame gave its place to pure joy as I put the first spoonful in my mouth.

Lots of gleaming and picturesque cafes filled with antique tables and chairs placed around blue ponds decorated with Persian tiles have become the charming hotspots for young and old these days. To grasp how these gorgeous cafes were created requires traveling down the history lane.

The Qajar dynasty (1789 to 1925) is the most populated dynasty ever in the history of Iran. Polygamy culture and the persistence on having as many children as possible to empower the dynasty have left Tehran, Isfahan and Shiraz with dozens of magnificent houses that used to be the homes of the wives and children of the Qajar dynasty.

Some of these aristocrat homes have already been replaced by skyscrapers, apartment buildings and shopping malls by the Iranian government but some have given their place to magnificent cafes and restaurants while still holding their beauty and character. Nowadays younger people tend to value their heritage more than ever, maintaining their identity while figuring out how to repurpose them for new uses. Here are some of these breathtakingly beautiful houses: