all about the sheep

all food and events 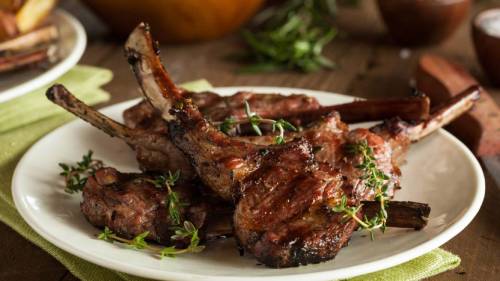 All about the sheep, we eat it all: offal, head and trotters and stomach.

Apart from lamb, beef and chicken marinated chunks and bits and pieces, Iranians love barbecued offals or organs meat. There are eateries that only serve lamb and beef's liver, heart, kidney and testicles on charcoal. These places are extremely popular among Iranians and some even serve skewered Kebabs or saffron marinated chicken chunks just in case some members of a family are not a big fan of offal and would like to order something less exotic... One of the most popular of those places is Golha eatery in Fatemi, Golha square very close to my neighbourhood. I remember years back that shop was a very small place and did not even have tables inside but just two tables outside on the sidewalk but after some years its popularity brought him enough wealth that he expanded the shop and bought the next-door grocery shop and made it quite a location. My grandmother loved that place and one of my most recent memories with her, when she was alive, is us sitting there and enjoying our bites together.

Another popular through a bit unorthodox Iranian food ritual is sheep's head and trotters stew. Being Iranian, sometimes even I do not understand Iranian's obsession with unusually Iranian food. Don't get me wrong, because I am one of those weirdos who is absolutely in love with sheep's head and trotter's stew. Having a piece of Saangak bread, baked traditionally on hot stones, dunking it in the stew, taking a piece of the tongue and a piece of the turmeric-yellow of the brain, closing the bite by tucking the corners of the bread piece, closing my eyes and disappearing the bite into my mouth, makes the world stop for a moment!

Just like offal eateries, there are restaurants that serve just and only the sheep's stomach as well and the head and legs. The head and the legs are all cooked in dozens of huge pots adding turmeric, pepper, cinnamon and salt overnight makes such a sticky and lip-smacking stew that only trying would be a way to fully grasp what I really mean. I understand that some people might even be disgusted by my description of the deliciousness of this food but if you grow up eating a kind of food through disgusting to many cultures, that food is just a legend on its own to the people of that specific country.

To most Iranians queuing up for hours in Ramadan to get your stew is the most pleasant wait of their lives. This stew is rich and so filling that can keep you full for the rest of the day. You have the option to buy the whole head and trotters or you can choose to only go for the tongue, the brain, or even the cheeks. Ofogh restaurant in Yoosef Abad, my parents' neighbourhood is one of the most famous of such restaurants in Tehran. Taking your own dish is an option but they also have plastic buckets to sell. After you choose your favourite parts they pour a few ladles of the stew juice over it, pack some Sangak bread and Narenj (an indigenous citrus fruit that looks like a crooked and wrinkly orange and tastes like lemon and tangerine at the same time. They believe Narenj breaks down the fattiness of the dish and balances it up).

As far as I am concerned though I would like to go with the full-fat package and not worry about breaking down the fattiness. I want my head and trotter stew as original and fatty as possible. I can always worry about the fat the day after! I can still picture my father standing in the queue holding our oldest and ugliest and biggest pot under his arm peeking through the shop and counting how many people are ahead of him. The way it's eaten is actually not very simple. It sometimes seems like we Iranians want to enjoy this food the fullest. We first shred some bread and soak the pieces in the stew and eat the soaked bread and slurp the juice. Then we make bites out of different bits and pieces. My father would always go for a whole head and one or two extra brains and tongues. Then he would take out the pieces using only his hands (after washing them a hundred times at my mom's supervision) and then he would put the pieces in our plates while we stared at him with our hungry eyes and stomachs.

Nowadays, clean heads are sold at butcher's and sometimes people buy the whole head and make their own stew cooking it overnight on low heat. Not to forget mentioning that this heavy stew is mainly eaten for breakfast. I remember when I was a kid, the clean head was not available at butcher's and my mom would have to go through the troubles of preparing the head for the stew with the help of our maid and the whole house smelled disgusting for hours. But the prospects of eating the stew the next day would make it worthwhile.

Sheep's stomach stew is also quite a story on its own. I personally do not love this dish so much because it really stinks no matter how well you cook it. It is the stomach after all! But lots of Iranians love this dish as it is filling and nutritious and it's often served in the afternoon. This stew has multiple variations when it comes to cooking it. Some cities for example cook it with oatmeal and chickpeas to make more nutritious food.